A superb eight volume edition of Gibbons History of The Decline and Fall of the Roman Empire. First published in 1776 and completed in 1788. Edited and with introduction by Betty Radice. The text used is reproduced from the Everyman Edition, 1910, published by J M Dent and Son.

Edward Gibbon is one of the greatest of the historians of the Enlightenment. Two centuries of massive scholarship and constant intellectual evolution have inevitably left many marks on Roman, Byzantine and even more on medieval European history. It remains a remarkable fact that anyone who wishes to study the later Roman or Byzantine Empire will still find Gibbon’s Decline and Fall of the Roman Empire the best, as well as the most readable narrative of it.

The eight volumes are: 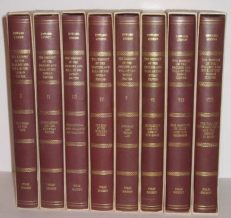