Here we have a successful young playwright wedded to one of these excellent women, full of affection and misplaced aspirates, whom clever men often do marry. Add Diana, a handsome girl of 22, a successful actress in the hero’s first successful piece, and the nature of “Diana’s Hunting” needs no explanation. Though flattered by “many a gilded scion of nobility” (as Mr. Buchanan says finely) and accustomed to be “elegantly attired in a light pink morning gown,” the fair Diana embraces the hero in her dressing room, dines out alone with him, sits on his knee, reads his books (a thing impossible to his wife), and asks him to accompany her to America. But a Mr. Short, one of the bluff, brusque, benevolent brutes of fiction, prevails on the hero to stay at home with the wife without the aspirates. As Diana was an underbred minx the hero acted with sagacity, as well as in accordance with the moral law. Diana's Hunting by Robert Buchanan (1841-1901), Poet, Essayist, Novelist, Playwright, Theatre Producer, Publisher, Editor, Actor. Active 1862-1896 in Scotland, England, Ireland, and Europe 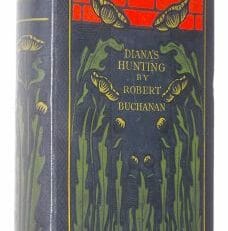