Henry St John, Viscount Bolingbroke, was one of the most creative political thinkers in eighteenth-century Britain. Bolingbroke was the first major thinker to face the long-term economic and political consequences of the Glorious Revolution, particularly the creation of the first modern system of party politics. His analyses of constitutional government and the party system are still relevant to the dilemmas of modern democratic politics, as are his recommendations for a patriotic commitment to the common good and the necessity of a non-partisan executive.

From Preface: The Works of those wise and great Men, who have been employed in public Transactions, have always been esteemed by the best Judges, of the utmost Consequence and of the highest Entertainment; as they enable us to trace the secret Springs of Events, and to form a true Judgement of Princes and the Conduct of their Ministers; to oppose the dangerous Attacks on Liberty, and settle the just Bounds of Prerogative. With a view to the Prosecution of this Design the following Tracts are now collected together; but it may not perhaps be thought impertinent to acquaint the Reader that, in the Infancy of the late Opposition, some of them were ushered into the World from a printing Press under Sanction of a late noble Duke, handed privately about, and very difficult to be procured; others were more openly published, but appeared at different Periods of Time, and among weekly Productions.

Contents: The Occasional Writer Numb. 1, Numb. 2 & Numb. 3; The Vision of Camilick; On Luxury; An Answer to the London Journal; Remarks on a late Pamphlet, intitled, Observations on the Conduct of Great Britain etc.; An Answer to the Defence of the Enquiry into the Reasons of the Conduct of Great Britain; On good and bad Ministers; On the Policy of the Athenians; On the Power of the Prince, and the Freedom of the People; Of the Constitution of Great Britain; The Freeholder’s political Catechism; On Bribery and Corruption; On Liberty, and the original Compact between the Prince and the People; The Case of Dunkirk considered; A Final Answer to the Remarks on the Craftsman’s Vindication etc.

Condition: Very Good – Some Wear To Leather, Some Loss To Gilding On Spine, No Foxing, No Inscriptions, Very Good Copy 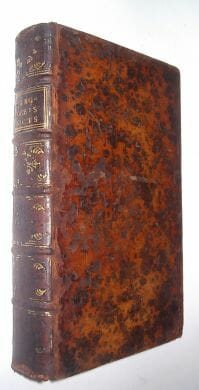 You're viewing: A Collection of Political Tracts Viscount Bolingbroke Francklin 1748 £225.00
Add to basket