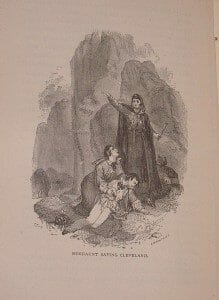 The Pirate
The novel is set in Orkney and Shetland in 1689, the plot hinges on an illicit relationship, and is driven by dark men twisted by their criminality, an obsessed woman searching for her lost son, and the murderous rivalry of two young men – a family tale which illustrates the uses and abuses of traditional lore, as well as Scott’s extraordinary grasp of the literature of the north.
Scott draws heavily on the diary he kept on his tour round the lighthouses of Scotland in 1814. In both the diary and the novel he weighs the real need to improve the agricultural methods of this barely subsistence economy against the force of tradition and the human cost of rapid change.

The Fortunes of Nigel
Set at the end of the reign of James VI and I, The Fortunes of Nigel sits among Walter Scott’s richest creations in political insight, range of characterisation and linguistic virtuosity.
Well versed in the political literature of the period, Scott drew a detailed picture of London in the early 17th century while charting the effects of Scottish influx into the English capital: the ambitions and fears of the incomers and the suspicion they aroused. The complex web of political (and sexual) intrigue, and especially of all-important financial dealings and double-dealings, is traced with a master’s hand.
No Scott novel has a more memorable cast of characters. King James heads them, with his childish irresponsibility and elusive character: a would-be Solomon and father of his country, theological disputant, prurient bisexual. But not far behind are jeweller George Heriot, clockmaker Davie Ramsay, courtier Sir Mungo Malagrowther, servant Richie Moniplies and many vivid minor characters.

Peveril of the Peak
Sir Geoffrey Peveril, an old Cavalier, and Major Bridgenorth, a fanatical Puritan, are neighboring landowners in Derbyshire, and though of widely different opinions and modes of life, have been connected by ties of reciprocal kindness in the days of the Civil War. Julian, the son of Sir Geoffrey, and Alice, the daughter of Bridgenorth, are deeply in love. The revival of bitter political feeling during the period of the ‘Popish plot’ brings the parents into acute conflict. The author draws elaborate portraits of Charles II and Buckingham, and gives glimpses of Titus Oates, Colonel Blood and Sir Geoffrey Hudson.

‘Here is a plot without a drop of blood; and all the elements of a romance, without its conclusion’, comments the King towards the end of Scott’s longest, and arguably most intriguing, novel. Set against the backdrop of the Popish Plot to overturn Charles II, Peveril of the Peak explores the on-going tensions between Cavalier and Puritan loyalties during the fraught years of Restoration England.

Ranging from Derbyshire to the Isle of Man and culminating in London, it is a novel which interweaves political intrigue, personal responsibilities and the ways in which the forces of history are played out in the struggles of individual human lives. But its true subject is perhaps the role of narration and the limits of storytelling itself.

Quentin Durward
Quentin Durward is a young Scotsman seeking fame and fortune in the France of Louis XI in the fifteenth century. He knows little and understands less, but Scott represents his ignorance and naiveté as useful to ‘the most sagacious prince in Europe’ who needs servants motivated solely by the desire for coin and credit and lacking any interest in France which would interfere with the execution of his political aims. In Quentin Durward Scott studies the first modern state in the process of destroying the European feudal system.

By far the most important of Scott’s sources for Quentin Durward is the splendid Memoirs of Philippe de Comines. Comines, who has more than a walk-on role in the novel itself, was trusted councillor of Charles the Bold of Burgundy until 1472, when Louis XI persuaded him to enter his service. Scott’s contrasting portraits of Louis and Charles, crafty king and fiery duke, essentially derives from Comines, whose memoirs are generally regarded as the first example of modern analytical history rather than chronicle. But it is as story that Quentin Durward succeeds, and it is one of Scott’s most absorbing tales.

Don’t miss any part of this series. Why not subscribe now?